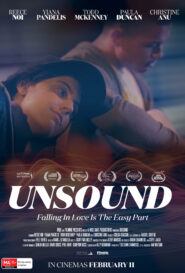 A musican’s romantic spark is ignited by a deaf, emerging trans-man, as they work together to save his community nightclub for the deaf.

Coming to Australian cinemas from the 11th February 2021! Visit the
UNSOUND Website for locations and dates

Listen to the soundtrack, including 2 songs written for the film “Colours of Your Life” and “Love Symphony” by acclaimed Australian recording artist, Christine Anu here!

When gigging guitarist, Noah, finds himself disillusioned and transient, he quits the band of his 90’s pop icon mentor, and returns to his mother’s home in Sydney, Australia, seeking connection and rejuvenation. Clashing with his mother over old wounds, Noah seeks solace elsewhere, and soon finds himself swept up in the vibrant, passionate life and of a young, trans-man, Finn, who is a proud, Auslan-only speaker who works and runs a local centre and nightclub for his deaf community. Together, the pair traverse new ground, sharing their languages – Noah’s music and Finn’s signs – with one another. They move carefully, as this is Finn’s first relationship while he is on the precipice of diving into his trans journey. Finn struggles to spread his wings and come into his own, as he suffocates beneath his father’s over-protection and the financial strife facing his club. Determined to reapply to his music and join a community, Noah offers to help aid the club any way he can. But as the two become closer, and with no shared language to fall back on, they only risk hurting each other, as they learn to be true to themselves.

Thank you to our supporters